Skip to main content
To provide you with the best experience, Cambria Hotel New York - Chelsea uses its own and third-party cookies on its website for technical, analytical and marketing purposes. By continuing to browse our site, you're agreeing to our use of cookies. Please consult our Cookie Notice for more information. 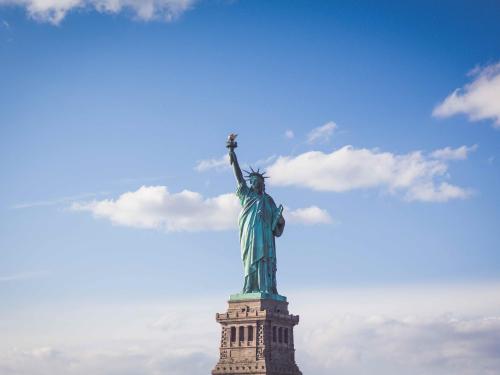 Standing tall with a torch of light in her hand and a stone tablet cradled in her other arm is one of the most famous statues in New York, the Statue of Liberty. Given as a gift from France and dedicated in 1886, the statue symbolizes both freedom and the spirit of New York City. Throughout the 19th and 20th century, millions of immigrants were greeted by the statue on their way to America. Now she welcomes visitors from all over the world as one of the most popular NYC monuments to visit in the Big Apple.

Plan on a full day at the Statue of Liberty Monument, especially if you plan on taking the ferry to visit historic Ellis Island. New York City wouldn’t be the melting pot it is today without the stories of the millions of people who passed through this island between 1892 and 1954. The museum and hospital offer a glimpse into what life was like on the island and what people went through to make the American Dream come true.